You can’t get organized because you’re not doing anything

A common organizing problem is knowing what to do, but not putting that knowledge into action.

The wheels totally fall off the bus and you go no where.

This happens with so many things other than getting organized, like losing weight (um, I’ll raise my hand here as being guilty with this one).

And other things that people feel they should be doing, but end up not doing for whatever reason.

And what to do about that?

Well, some people choose to keep on keeping on, searching for more and more information to grow their knowledge base, hoping they’ll find the magic solution.

Some people call a professional in to help.

And some people just start to take action on their own.

These last two groups of people are the winner, winner chicken dinners!

They’ll find success with their organizing goals, unlike the first group of wishers and hopers.

Cause they’re taking action and starting to move forward with their issue by doing something.

It’s as easy as that!

I recently was working with a client, let’s call her Kara.

Kara had let a bunch of papers, books and magazine clutter up her home.

And by a bunch, I really mean a ton. There was paper everywhere. Every flat surface was covered with a stack of paper.

It was so bad that she didn’t have friends or family over.

She was too embarrassed!

We were working to clear her dining room table which hadn’t been clear for about 3 years.

Honestly, she didn’t remember when she last had it cleared off, but the dates on the mail and receipts were from about 3 years ago…

As we worked, I encouraged her to not stop until we had entirely cleared off and dealt with every last piece of paper on the table.

But with a few pieces of paper left, she was kinda running out of steam and wanted to quit.

I could tell I was pushing her big time, but I knew getting her to finish was critical.

Not finishing organizing projects is a huge problem for a lot of people, especially my clients.

They get 90% of the way there and then leave the rest to finishing up another day.

But that day never ever comes!

Then the whole process is repeated weeks or months later with no forward progress ever being made- the same space is just organized again and again like a cruel re-enactment of Groundhog Day.

If you start organizing a drawer, finish it!

Give yourself enough time for the project in the first place and you’ll be half way there.

Force yourself to finish.

Oh and pitching everything that’s left is totally an ok strategy!

You can’t get organized because you’re sabotaging yourself

Everyone who starts organizing something does it with the best of intentions.

They want to be less stressed.

They’re tired of dealing with a space overrun with stuff.

But it could be that your attempt to get organized, is doing more harm than good!

I know you’ve seen those shows that show a crazy transformation in only 30 minutes.

Transformations on the scale that the tv shows reveal don’t happen in real life like that at all.

It would take months for you (working alone, that is) to make such a huge transformation.

But because you’ve seen it on tv and have seen the relief and joy of the homeowners, you want a little piece of that feeling for yourself.

So you embark on a crazy goal:  I’m going to organize this entire room.  Today!

And you proceed to rip into a huge organizing project like a hungry mama bear.

But then an hour or two later, you realize how much hard work it is and get overwhelmed and frustrated.

What’s happening is that you’re completely sabotaging yourself by taking on too much all at once.

The smartest way to make a lasting change in your space that won’t leave you overwhelmed or frustrated is to start small.

Clear out and organize a drawer.

Or a small cabinet.

Then move on to another small space in the same room.

Continue until the entire room has been worked on and finished.

So there you have it.

Three reasons why you can’t get organized.

Plus some solid advice and exactly what to do!

Ready to have an accountability partner?  If you’re in the Cleveland area, work with me!

If you’re not, check out the 365 Days to an Organized Life Printable Calendar!

It’s just like having a professional organizer in your home, with a simple daily task that makes getting organized both fun and easy!

No more thinking about what to do, just do the task and get on with your day! 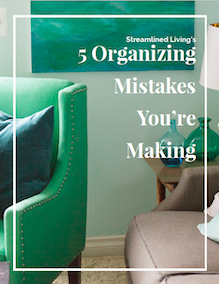